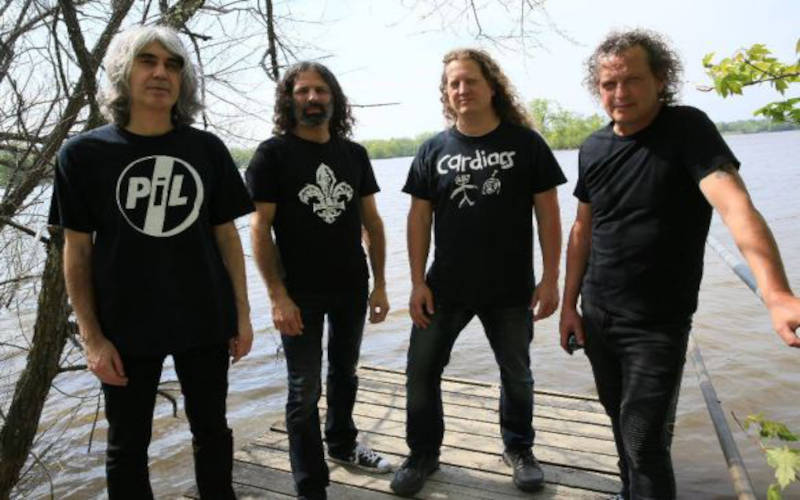 
Voivod’s first single previewing their soon to be released album “Synchro Anarchy” is the first song I heard with their current lineup. I haven’t heard anything by them in years, but since they were one of the first thrash bands I was exposed to I wanted to hear what they’re up to today. Long before Arcturus, Sear Bliss and Darkspace explored the depths of the cosmos, Voivod had already established themselves as one of the most original bands of the thrash era. “Planet Eaters” provides assurance that Voivod have many new worlds to explore, even if I missed many of their journeys.

While listening, I was reminded of their underground classic Dimension Hatröss, released during the formative years of thrash and extreme metal. No stretch of the imagination is needed to determine their infl uence on cosmic black metal or space themed atmospheric black metal. “Dimension Hatröss” was a thrash milestone that opened many doors for bands to create their own universes, and “Planet Eaters” continues Voivod’s exploration of new ground.

The musicianship is similar to Hatröss, with tighter songwriting and the hint that experience has seasoned them immeasurably. As with their late great guitarist Denis “Piggy” D’Amour, Daniel “Chewy” Mongrain brings elements of Yes, Pink Floyd and King Crimson to Voivod’s sound. He almost passes for Piggy on Hatröss with his trippy jazz-thrash. The similarity probably results from him joining the band as a touring guitarist before becoming a full-time member. Even so, the combination of pop, jazz, and technical death metal is enough to make him unique. Likewise, bassist Dominique “Rocky” Laroche brings a tighter bluesy influence to the band. This flexibility speaks for itself without sounding sententious or talking down to the listener.

Denis “Snake” Belanger’s lyrical concepts and Michel “Away” Langevin’s video art design for “Planet Eaters” complement what Mongrain and Laroche do with the song. It has been traditional for Voivod to address technology’s interference with the human spirit, and this time they address a relevant issue, if you’ve been keeping up with the news: reaching for the achievement of space travel to satisfy media prestige and corporate greed rather than benefiting humanity. Who is better, those who advance technology for self-serving reasons or those who prefer to stay here rather than take human greed to other worlds? In keeping with the disaffected spirit of underground metal, Voivod challenges you with this question.

Don’t forget to keep checking back on https://theantisocial.network for more great articles!