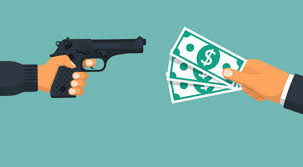 Are we being taxed into tyranny? Contributor Haniel looks at the state of the US taxation system and gives us his opinions and ideas. Its an interesting read too!

There has been a lot of debate the past few years in the US about taxation and the IRS. The Fair Tax or a Flat Tax; which is better? Sales tax on interstate sales…is it fair? Property taxes, “sales and use taxes”, estate or “death” tax, the dreaded “VAT”…

There are lots of opinions and perspectives on the best and most effective way to take your money at gun point.
But here is my take on this:

You read that right. NO TAXES. End all forms of taxation as it currently stands. End every single method and way that governments take your money while not providing a single measurable benefit. “What about roads and the military or courts or schools? How will those things get built or work?”. Ok, send me a budget and a bill, and let my county and state determine if we like what the money is going for. Schools? I don’t use ’em, so why should I pay for em? Fire Department, police, military, courts…hey, no problem. Let me know how much that stuff costs.

What about the services tax provides?

All of those things that the tax payer benefits from, like local law enforcement (which, mind you, is largely paid for with fees and fines…), FD, roads (in my state, tolls pay for roads), schools (impact fees and unfair property taxes pay for schools, even if you don’t have kids that go to any local schools), and other tangible, measurable expenditures do not need to be paid for by direct federal or even state taxation. But exactly is paid for by the taxes directly [stolen] from the taxed? Wealth redistribution, payouts to foreign countries, billions to scientific research that none of us are allowed to know about, federal prisons; waste, fraud, and abuse; a defunct and failed national health system; and of course, the most egregious expense of them all: bloated pensions and lifelong benefits for politicians and federal workers. Think about that for a second: they take from you and your future so they can directly enrich themselves. That makes you a slave.

I am not going to get into the numbers right now, because this is more of a philosophical rant than one of scientific analysis, but there is a hidden problem with taxation that has shown its ugly face in the past two years, and it is this:

Through the taxes you have paid to your government, either the US government or another nation, you have funded your own oppression. That’s right. You gave them the funding they needed to lock you down, force masks on you and your kids, arrest mothers who took their kids to the park, take your kids away and shove needles in them, and arrest you for simply walking out in public or expressing your Freedom to Assemble peacefully. YOUR MONEY allowed them to do that. You didn’t see a single politician not get a paycheck in the past 2 years. You didn’t see a single politician go bankrupt. How many of them committed suicide because of the lockdowns? Instead, they gave themselves raises, raised your taxes, killed jobs because of political reasons, and used the media to cover it all up and make it seem like they are your friends…all while going to lavish and expensive gatherings and parties as you starve to death. Did you see any IRS employees on the employment line at any point in the last two years?

You’ve funded tyranny. You’ve paid for your own demise. The blind check you wrote these monsters has made your world into a giant prison where they can make up any story they want and clamp down at any time they want, for as long as they want. They did all of this with your money that allowed them to create a world that is more like 1930’s Germany than anything else. This alone is grounds for major, sweeping tax reform, once, of course, we get our world and lives back. Which may never happen in our lifetimes.

Giving away a percent of your income or paying for a percent of what you spend to governments gives them unlimited power over you. And you have no say where that money goes or how it is used. They show up with guns and take you away if you don’t give it to them. The IRS has no limits to what they can do to you. They are above the law. That is, of course, unless you are a politician, then the IRS is a political weapon to attack opponents and to assure more power for the political elite.

The reforms need to be sweeping and catastrophic. They need to rip apart the unlimited funding streams of governments. The fact that they use your own money to oppress and persecute you is a sign that this crap needs to end, and end soon. Here are my reform bullet points that need to be enacted:

1) Abolish the IRS. This “guilty until proven innocent” nonsense has to stop. If they accuse you of something, then you have the right to be presumed innocent unless the IRS can prove that you committed the crime.

2) Abolish the 16th Amendment. No more direct federal taxation on the citizenry.

3) All methods of taxation need to be returned back to the states and the individual municipalities. We truly have NO real representation on taxation at this point.

4) Balanced budget amendment; Not a single penny goes to any level of government unless they tell us all exactly what it is used for. All surplus goes back to the people or some sort of “rainy day fund”.

5) Congress MUST present a budget to the states and allow the state legislatures to determine if that budget is within reason. Congress must negotiate with the states regarding what is paid and for what.

6) End all congressional life-time benefits. All congressional salaries are to be equal to the national average. They only get a raise when the economy is good. If the average is $47,000 a year, then congressmen make $47,000 a year. End the endless expense accounts. End the massive staffs. And no more “premium health care”; they are welcome to use the same system the rest of us use.

7) End the raiding of social security and medicare. People that pay into these things get what they paid for. No more federal services to illegal immigrants or people who don’t pay into stuff. Don’t talk to me about compassion when you are taking money from one person and harming them to enrich another. How is that compassionate?

8) End interstate sales taxes. If a business doesn’t have a physical presence in a state, then it is technically interstate commerce and is the exclusive domain of Congress to regulate that.

9) END property taxes. If you buy a property, you own it. It is yours. You shouldn’t have to pay any government rent to occupy the property. It’s yours. When you buy it and pay taxes, that’s it. It is yours forever until you sell it or give it away.

10) The overall tax burden for an individual cannot exceed 5% of one’s total earnings in any given year. With a $15 trillion dollar national economy, The US Federal government shouldn’t have any problem working with about a trillion dollars a year for the basic constitutionally delegated responsibilities. Anything else that is a service that is paid directly by the people, such as social security, IS OFF LIMITS and not taxable.

11) Any income earned is only taxed ONCE. This will assure that the tax burden is lower for the individual.

12) End all protectionist tariffs and taxation. For instance, taxing nutritional supplements but not medications; creating taxes that big businesses can handle but kill small businesses, etc…Government should assure that the field is level, not to pick “winners and losers”. No business is too big to fail, so end all corporate welfare and end any involvement of the federal government in business affairs except for basic safety measures.

13) End corporate, payroll, and any other type of tax that is restrictive to businesses of all sizes. This allows all businesses to grow based on the market itself.

14) States can set their own taxation based on their own legislature. Some states have no income tax and they are some of the more prosperous states.

15) End all redistribution of income. What people pay into is theirs.

16) End all taxation on savings accounts and retirement accounts of any kind.

17) End “Use taxes”, which is one of the most petty of all taxes. You shouldn’t have to pay the government for permission to “use” a product they had no hand in creating, selling, or servicing.

18) End the “death tax”. Governments should have no rights at all to anything after the death of a person. The Will of that individual should determine who gets what.

20) Last, but not least, audit the federal reserve, stop “printing money” at will, end hyperinflation, audit all private banks, crack down on “Wall Street” corruption, and end any and all “trusts” and monopolies that are protected by federal or state governments. Bring back free and fair competition. Put the US back on the gold standard. Stop wasting money.

I am sure I can go on and on. These are just some ideas that I think should be implemented, and it is mostly just common sense. If you continue to give your governments a blank check where they can take as much as they want from you, then they can use your own money to turn you into a prisoner in your own home. The past two years are proof of that. This is why we need reform.

If you enjoyed reading our taxed into tyranny article, please keep checking back regularly at The Antisocial Network on a regular basis!