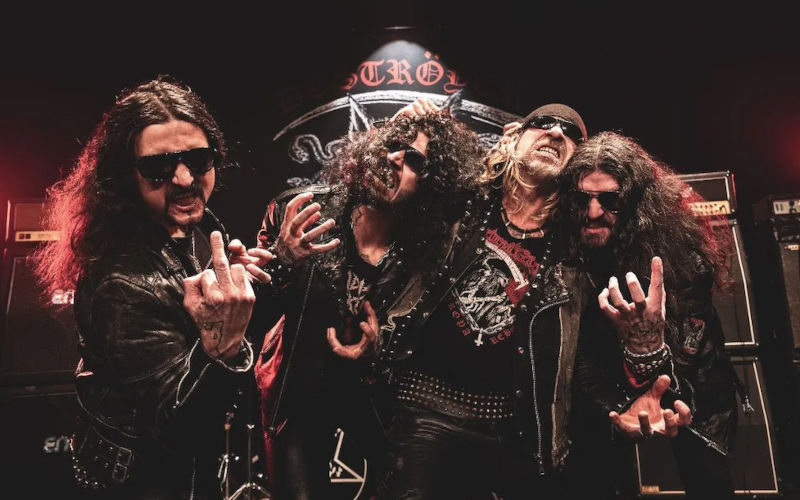 It was with great anticipation I sat down to listen to the new Destroyer666 Never Surrender album. It had been a while since a new album from D666, and dammit from the outset this is classic Destroyer. For those that don’t know Destroyer 666 play a hybrid thrash / death metal with black metal undertones. They mix a few musical genres together and they pretty much do a perfect job of it.

D666’s label “Season of Mist” have put the whole album on youtube for you to have a listen, while you read this review:

Destroyer are a quality band, I’ve been following them from their classic “Unchain the wolves” album and even had the honour of sharing the stage with them in the late 90’s for them on the “Pheonix Rising” or “Cold Steel” tour tour. Destroyer have also suffered from a lot of bad press in the past. Front man Keith has said some inflammatory / regrettable things in the past which others have blown out of all proportion. Whatever your opinion on the man, he’s certainly lived up to the phrase “Never Surrender”. He’s put his money where his mouth is and kept band going for what would have to be 30 years now, no mean feat!

Musically this album displays some great chops. D666 are fine musicians. They write songs that are very easy to listen to and musically infectious. Great riffs, big ass choruses with gang vocals that stick in your head. Even the guitar solo’s whist not being the most technical are genuinely memorable. The songs have multiple layers to them with some melodic dual riffing, and great orchestration. The guys really know how to write a song! Even the drums are heavy as all hell without drowning out the music, they have an organic feel to them (ie: everything is well played but not overly mechanical) which is a pleasant feel in todays world where everything is over produced. This is modern band with a very staunch old school feel to it.

My choice cut on this album would have to be the early release single, “Guillotine”. I’m not sure if it’s because it’s had a little more time to grow on me but its got everything I like about Destroyer666 in one song.