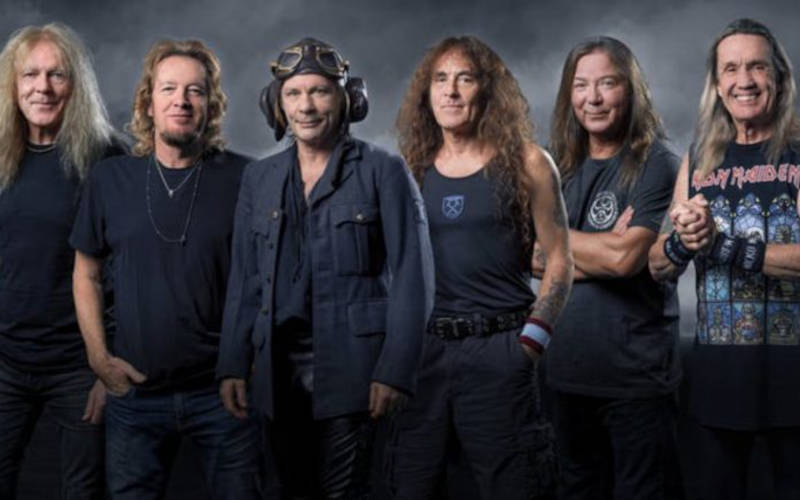 Iron Maiden “The Writing On The Wall” official single/video (Parlophone)

Iron Maiden’s first new single in six years has been eagerly awaited since they started buzzing about it, hinting something mysteriously touted “Belshazzar’s Feast”.

Apparently all they needed was to drop the announcement on their official website to get people talking. This in turn generated enough interest with Maiden’s worldwide fan base for dedicated rivetheads to conduct research and “Da Vinci Code” style decrypting before July 15 rolled around. According to ultimateclassicrock.com, “Belshazzar’s Feast” directly referred to the Old Testament’s Book of Daniel and the story of Prince Belshazzar prior to the fall of Babylon. From discovering this fans concluded it would be days before new music was made available. If you consider it, it was kind of a no-brainer as Maiden has long been known for incorporating science fiction and occult themes. The animated video short “The Writing on the Wall” has them within a post-apocalyptic dystopian narrative. And of course, Maiden’s undead mascot Eddie makes several appearances, most notably as an anti-hero of a sort For a band that built a fiercely loyal following of supporters, without media hype, in the midst of changing mainstream trends, their myths and legends seem as engaging as “Piece of Mind”, “Somewhere in Time”, “Seventh Son of a Seventh Son” and “Brave New World”.

You could be middle aged like many of my contacts and I and not feel too ancient watching this video. Hell, the band show no signs of slowing in their sixties, and after forty years they still sound fresh. Based on an original story by Bruce Dickinson, “The Writing on the Wall” is heavy with biblical imagery and commentary on Trump America and the top one percent. With direction by Nicos Livesey, creative direction by Mark Andrews and 2 dimensional and CG graphics by Blink Ink, it’s somewhere between Mad Max and Heavy Metal magazine. Between the desert setting and apocalyptic southern rock feel, you get a sense of the aftermath of a global catastrophe caused by lack of concern for the environment. While the elite celebrate their dominion, the remnants of humanity are enslaved to provide food or breeding purposes. Without revealing too much more, it’s unclear how this original story ends or whether it’s part of a larger narrative to be revealed on Maiden’s next full length “Senjutsu”. But great care was taken to pay homage to the Maiden many of us grew up with, all the way back to the Paul Di’anno days. By the band’s reputation alone this single and video are guaranteed an audience, but at the same time it stands alone as a post-apocalyptic tale and social satire directed at the times we’re in. –Dave Wolff

If you liked this review, be sure to keep coming back to The Antisocial Network on a regular basis!