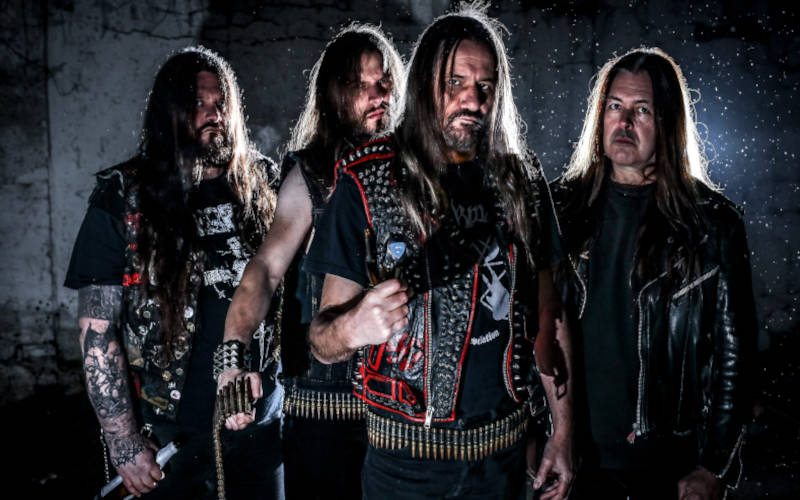 Another German thrash band I grew up with since the eighties still runs on its own steam, four decades after its inception. To this day “In The Sign Of Evil” remains one of my all-time favorite thrash EPs, next to Slayer’s “Live Undead” and Venom’s “Warhead”. The funny thing is, while I was making the transition from rocker to thrasher I considered it complete untalented garbage, the worst noise I’d ever heard in my life. I remember telling people at first, “Sodom sucks! They have no talent!” and so on.

The band themselves thought there were problems with the finished product, but recording a technically perfect debut was not as much a concern as recording a “cult” debut that demonstrated their heaviness. In that respect they succeeded. As the soundtrack to rebellion against the corporate new wave radio of the time, something about “Evil” slowly grew on me, and by the time “Expurse Of Sodomy” was out I was thoroughly hooked and singing Sodom’s praises every chance I got.

What appealed to me about Sodom was the grittiness attached to their songwriting, the grittiness rooted in the working class environment they emerged from. While other bands cleaned up and experimented with new sounds Sodom always stuck to their guns, keeping in touch with the grime of the mining communities of their youth. Composing their songs to reflect their working class neighborhoods in their early days, they retained that attitude all through their recording career.

Sodom’s dedication to playing the rawest music possible is very much part of their latest EP “Bombenhagel” which includes a reworked version of the original which appeared on 1987’s “Persecution Mania” and was a highlight of their live performances for years. Depicting the horrors of World War II, “Bombenhagel” marked the beginning of the anti-war themes of albums like “Agent Orange” (1989), “Masquerade In Blood” (1995), “Code Red” (1999) and “M-16” (2001). I daresay the new version surpasses the original in terms of dirt, heaviness and speed, not to mention Tom Angel Ripper’s distinctively demonic approach to his vocals.

Sodom’s new lineup, including Yorck Segatz (guitar), Toni Merkel (drums) and Frank Blackfire who played on “Sodomy”, “Persecution” and “Orange”, brings their experience working in bands to this version, delivering it with equal talent and controlled energy. “Coup De Grace” the first of two new songs recorded for this EP shows several time changes and still sounds “Sodom-ish” with a touch of Sepultura. The second new song “Pestiferous Posse” sounds a little drawn out at five minutes but regardless held my interest as much as the previous tracks. All in all “Bombenhagel” is a worthwhile listen for all Sodomaniacs. –Dave Wolff