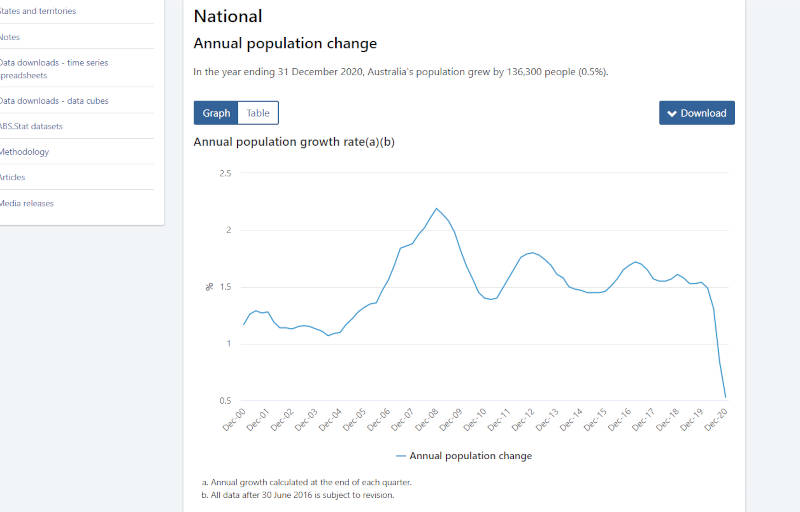 There’s been some talk on the internet about the Covid being a plot to lower population growth around the world. Well on browsing the Australian Beareau of Statistics website it would appear that these claims are not without any grounds at all.

It would appear that population growth has basically taken a nose dive, in Australia due to immigration being virtually halted into Australia. The growth rate plunged to a record low of 0.5%. (See stats here). In Australia typically the age of parenthood has been increasing, people have been putting off having children till later in life. Presumably for economic / career reasons primarily.

Another interesting thing to ask ones self, is who is actually having babies in this economic climate? Some babies are planned and there are definitely a section of society who have been working from home and as a result have more time to ‘make babies’. Realistically these same people are probably in better financial shape, since they aren’t wasting money on fuel, eating out at work, parking etc… So they’re probably in a better financial position to do this. Unfortunately there are others who have lost their jobs, have reduced hours or face job uncertainty. They have no financial security and therefore would have to put off the idea of starting or expanding their families. In any culture, there’s always going to be a certain amount of unplanned pregnancies as well, which will be interesting to see how this is affected. Ie: are people bored at home and having more sex? Will nightclubs / bars etc… under social distancing measures mean that people haven’t been getting drunk and hooking up at the rate they normally do? Since the Covid shutdowns kicked in in March in Australia so there’s no real way to gauge this on the stats which only go till december 2020 (as obviously a pregnancy takes 9 months to show up) but the next few months will be a telling story.

Anyway check out the Australian Bureau of Statistics website for some more interesting stats if you have time!