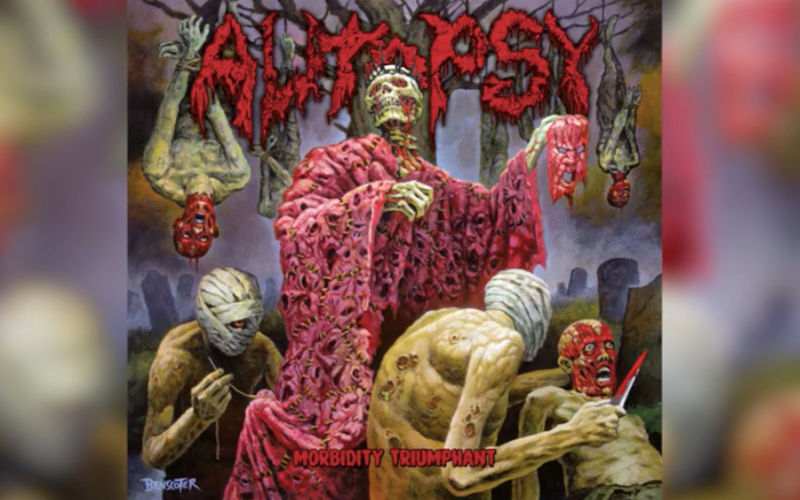 Autopsy (Hailing from Florida) make sick disgusting music and their lyrics aren’t any better. It fills my heart with joy that they are still going. Autopsy, for those who don’t know are one of the originators of Death Metal. I think Autopsy’s only mistake was they just came about too early when the music was in its infancy. Formed in 1987 after Drummer Reiffert had left the seminal death metal band “Death”.

From the start of proceedings Autopsy’s music had more of a groove than say Possessed or Death and appealed to a lot of the crust punk scene and even resonated with the the emerging black metal scene in Europe. It wasn’t as technical as the things that Morbid Angel and Death were doing but still capitalised on the over the top gore imagery and lyrics of the time. I can’t help but feel that Autopsy, if they kept going the way they were going before they quit in 1995 could have been much bigger than they are now. In their absence, bands like Deicide, Morbid Angel, Death, Carcass and Cannibal Corpse released some huge albums and drew big attention to the scene. It’s important to note, these bands were much more polished than Autopsy. Looking at it that way they probably weren’t going to get the almost mainstream success that the aforementioned bands did, but they could have certainly ridden the wave of death metal popularity at the time.

The band re-united and released a few albums from 2011 onwards, persevering in their old school death metal vein. I’m sure the band would have sold some level of records but never would have been able to exist soley off album sales and touring. To put it in perspective this is a band that never would have huge sales, but now 35 years into their existence are still releasing quality music with the spirit the band would have first started with still current in their modern sound.

Autopsy Morbidity Triumphant continues on with the tradition of not giving a fuck about trends or what the current metal scene is doing. In fact with the exception of a slightly clearer studio sound this could have easily come out in the late 80’s or early 90’s. If you were into Autopsy then, you will still like them now, its almost like a time machine back to a magic time in death metal history. Is this the greatest death metal album ever? Hardly. But it’s a welcome return to old school sensibilities and sound. The songs are instantly likeable, and have a great groove to them. As with most death metal albums you either like it or not, there’s no particular stand out tracks.

I for one, really liked this and all I can do is urge you to check it out on Youtube or even give some of their older stuff a chance on their Bandcamp page. It’s not for everyone, but thats part of its unholy charm!

For more great music and articles be sure to keep checking back on http://www.antisocial.network on a regular basis!